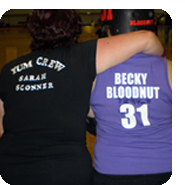 They came, they saw, they pushed each other over quite a bit.
And so it was for the Ballarat Roller Derby League‘s first ever bout, The Derbytante Brawl.
It was a brilliant afternoon of sport and spectacle with lots of skill and courage shown by the women on skates as well as a great atmosphere, with the diverse crowd really getting into the spirit of things.

After an early show of force from The Libertines, who in the end  just couldn’t sustain it, The Gold Diggers came out victors.

But at the end of the day it didn’t really matter ’cause they were all amazing.