I’ve been researching Gaeilge and Wadawurrung languages for a project. During invasion and colonisation languages of origin were prohibited. On pain of jail in many cases. We can forget the power of language given our lives are now connected to a global world, mostly. And it’s now that global world that is reconnecting language for some, including me.

I’ve always been jealous of my sister Siobhán. She has an Irish accent on the a in her name. It’s called a síneadh fada, a long accent. She uses it now, but not when she was younger. Mum and Dad were keen to fit into their new country. From a large Irish immigrant family with seven children, Siobhán was the only one with grammatical accent. All us kids were born here. 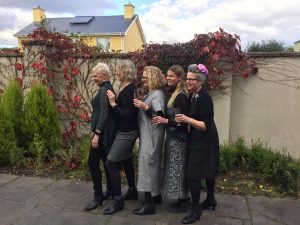 Four of the sisters and a nibling in Kenmare, Ireland in 2017

Lightbulb went off for me today. I do have síneadh fada, more commonly now called simply fada. My name, Erin, in Gaeilge (Irish) is Éireann*. Exploring my cultural language has given me a passion for language I’d not known before. For the land I am from and the land I live on.

I was telling my sisters today about my discovery and asked if they wanted to study the language with me.
My sister Colleen said “I’ve gotten get through Spanish first. Dan (son) says I sound like a 1950s scholar, terribly polite.”
That reminded me that when I was in Bali, a million years ago the women laughed when I said ‘Hello’ or ‘Thank you’. I laughed along with them and asked if I was terrible. They said “No, not terrible. Royal!”
Siobhán rejoined that when she was in Paris her friend told her she had just asked for a quill and scroll.
Next sister told a story about Italy where, instead of asking for a francobollo (stamp), she had asked for a pappagallo (parrot). She got neither!
So I’ll change my name informally for now. A longed for fada awaits me!


*note: it might also be Éirinn but I have to settle somewhere!